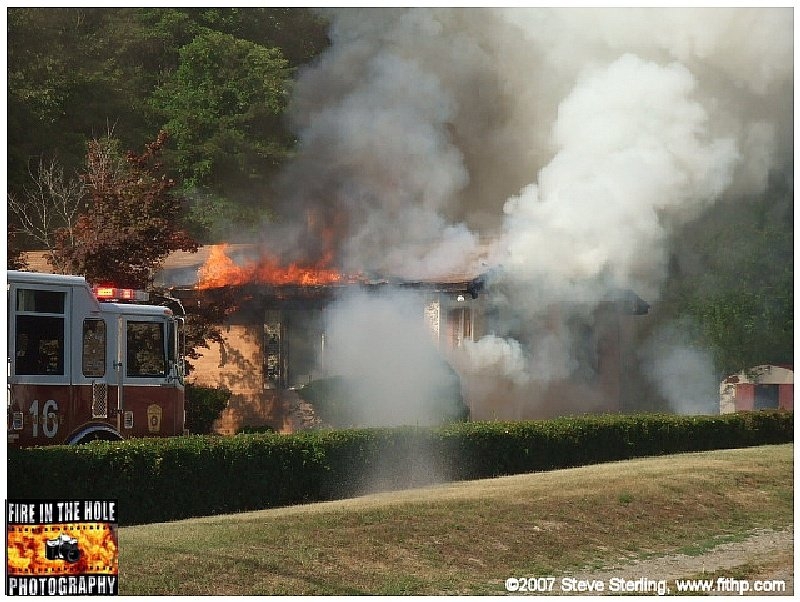 6/16/2007 – At a little past 5:30 p.m. Wicomico County Central alerted Stations 16 and 2 (Salisbury) along with Station 5 (Hebron) for a reported structure fire on West Road. Salisbury Paramedic 2 arrived on location confirming a working fire. Assistant Chief 1 (Capt. J. Bragg, Acting) arrived shortly afterwards, established West Road Command and advised units of a 1-story ranch dwelling with heavy fire on the A/D sides. Engine 16 established a water supply laying out a 5-inch supply line from a hydrant and up driveway. The crew of Engine 16 then stretched a 1-3/4-inch bumper line to the front door. Deputy Chief 2 (Gordy) arrived and assumed command and assigned AC 1 the Division 1 sector. As the initial attack was underway, the crews of Paramedic 16-1 and Paramedic 2 conducted a primary search and reported all clear. Hebron Engine 507 arrived and was assigned RIT duties while Tanker 5 supplied them. Engine 210 supported the interior attack with a backup 1-3/4-inch line. Truck 16 was assigned exterior ventilation duties and controlled the fire extension on the exterior. The bulk of the fire was confined to the garage and attic with smoke and heat damage throughout the entire dwelling. Crews identified that two occupants were on scene and one had suffered burns while trying to escape the garage area. Paramedic 16 -1 treated a male for second degree burns on the leg and transported him to Peninsula Regional Medical Center. A crew member from Engine 210 suffered a medical emergency while working on the interior attack and was also treated and transported to PRMC, by Paramedic 2. Truck 2 and Engine 507 completed extensive overhaul of the dwelling. Other units on the scene were Air/Light 2 and Ambulance 16. The Maryland State Fire Marshall’s unit responded for investigation and the Red Cross was requested to help relocate occupants.