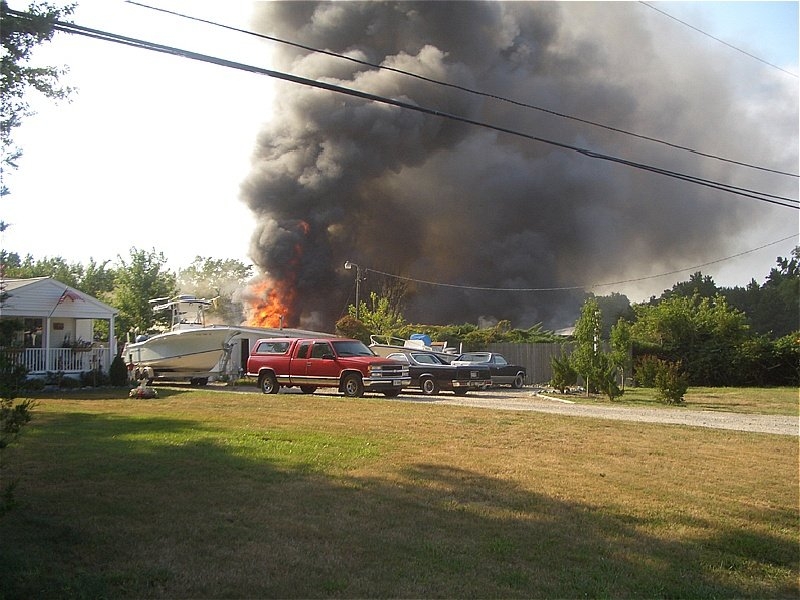 7/24/2007 – At approximately 1714 hours the Worcester County Emergency Operations Center began receiving multiple calls reporting a building fire on Racetrack Road in the are of Ocean Downs. The box alarm was transmitted immediately after, alerting a full response from Berlin, one engine from Ocean Pines, one tanker from Showell and two tankers from Ocean City.

Assistant Chief Derrick Simpson reported a heavy column of smoke from the area of Barrett Chevrolet. An updated address of 10307 Racetrack Road, Planted Pleasures, was relayed to all responding units.

First arriving Chief Derrick Simpson reported a 30 ft x 300 ft commercial building with heavy fire conditions in the front of the structure and established ”Racetrack Road Command.” This structure was a chicken house that had been converted to a plant nursery. Initial engine crews mounted an aggressive attack using 2 1/2” preconnects. A tanker shuttle was placed into operation with the use of portable tanks. Command requested a second alarm for manpower. A secondary water supply was later established through drafting from the Turville Creek Bridge.

The State Highway Administration was requested to assist with shutting down Route 589 due to the number of fire personnel and vehicles in the area. Crews noticed that a brush fire began to spread north of the building fire into the woods.

Units on the scene used an estimated 200,000+ gallons of water to extinguish the fire. Units operated on the scene until approximately 2039 hours before returning to service. Showell Engine 803 provided a standby at Berlin Fire Headquarters during the fire.