Funeral services for the Delaware City firefighter who died this week following a hit-and-run crash, have been set for after the holidays, fire officials said.

A viewing will be held from 3 p.m. to 7 p.m. Sunday, Jan. 4, at the Delaware City Fire Company Memorial Hall.

Funeral services will be held at the hall the following day at 10 a.m.

The hall is located at 815 Fifth St. in Delaware City.

A firefighter honor ceremony and procession will immediately follow en route to the Odd Fellows Cemetery, at 420 S. Dupont Blvd. in Smyrna, where she will be interred.

Smith, who has been a volunteer firefighter with Delaware City for more than five years, also served as a volunteer with Volunteer Hose Company of Middletown.

She is survived by a 12-year-old daughter, Emily.

A trust fund has been set up in her name.

Donations can also be made directly to the Delaware City Fire Company at the same address.

Smith, 30, died Monday of injuries sustained in a hit-and-run crash on U.S. 13 on Saturday while rendering aid to injured 30-year-old motorcyclist Edward Reiss, of New Castle.

He’s been charged with manslaughter, second-degree assault, driving while revoked, leaving the scene of a crash and failure to report a crash.

Taye, who is a paraplegic and was allegedly driving with a revoked license, was committed to Young Correctional Institution on Monday in lieu of $37,500 bail.

He has since been released after posting bail. 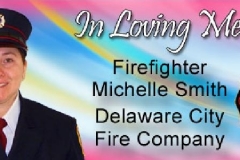