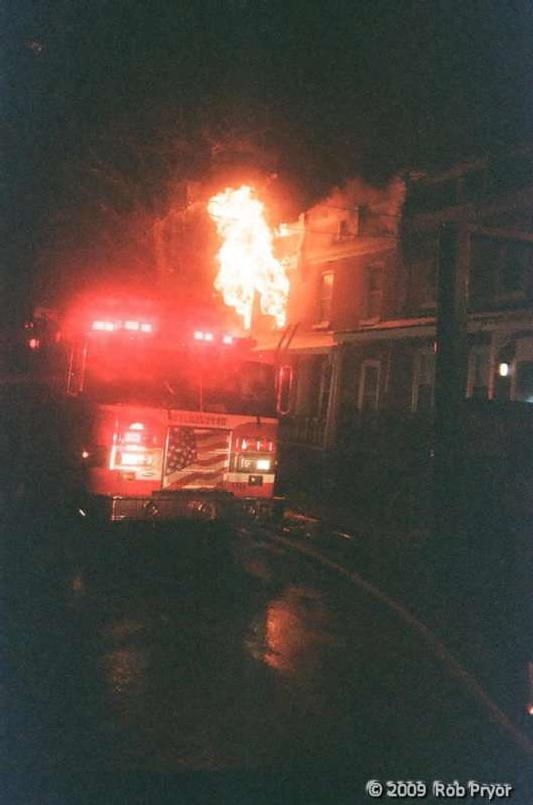 12/31/2009 – At approximately 2025 hrs on December 31, 2009, Wilmington FD A Platoon firefighters were dispatched to the area of W. 22d and N. West Streets for a reported house fire. On the box alarm were Squrt 4, Engines 5 and 1, Ladder 1, Rescue 1, Battalion Chiefs 3 and 1. Responding from Station 4 (2 blocks away), Battalion Chief 3 (McKim) arrived and reported a two story, end of row dwelling with fire showing from floor number one, requesting a fourth engine company. Crews from Squrt 4 stretched a 2 inch attack line through the front door, while the crew of Ladder 1 began opening up. As a second line was being stretched by Engine 5, Squrt 4 reported that the stairs had burned away. During this report, the second floor of the house flashed, prompting the IC to order an evacuation of the structure. At this point, the attack switched to the exterior and companies hit the fire from outside with several handlines. The residence was packed with a large amount of furnishings and items, creating a heavy fire load. Fire extended to the house on the D (right) side and smoke extended to a third house. It took over two hours to place the fire under control. During the fire, a portion of the second floor collapsed into the first floor. A total of six engine companies, one ladder company, and the heavy rescue were used to control the fire, staffed by approximately 40 firefighters. As a side note, five engine companies is the current on-duty strength of the WFD, an engine company is out of service each day due to ”rolling bypass” because of budget cuts. The normal strength of the WFD should be 6 engines, 2 ladders, and 1 rescue with a total of 38 firefighters. The sixth engine on this incident (Engine 104) was a company comprised of off-duty firefighters who were called back and responded to the scene late in the incident. One firefighter sustained minor knee injury during the incident. 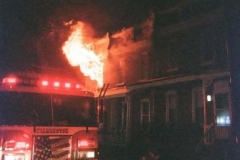 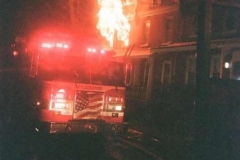 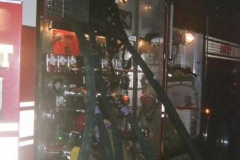